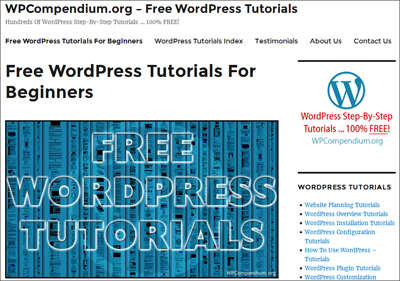 WordPress is the world’s most popular content management system application and is used to power millions of websites worldwide.

WordPress is also an extremely popular niche for bloggers and blogging and competition for search terms related to the WordPress tutorials niche is very high, as many web service businesses, web developers, web designers, and web marketing agencies compete for clients and offer tutorials as content to attract visitors.

The main method used by WPCompendium.org to drive traffic to the site is content publishing and content syndication (content is automatically syndicated to the site’s social pages). Although this is an effective way to generate traffic and get many of the site’s pages ranked on Google, it is also very time-consuming. The site publishes detailed and original content which has taken many years to create. 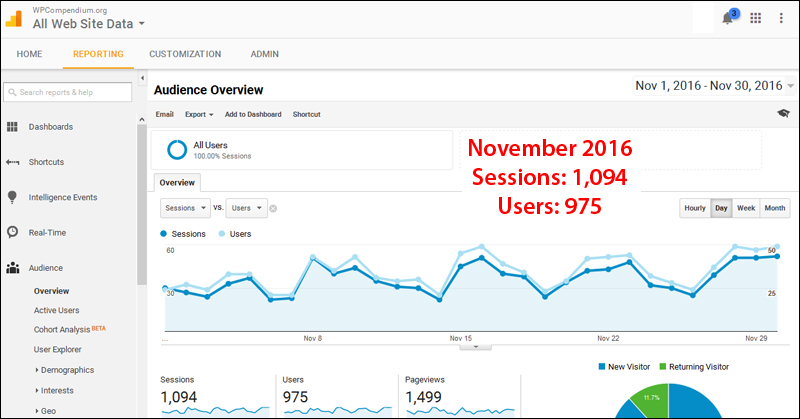 WPCompendium.org was launched in May 2016.

As the screenshot from WPCompendium.org’s Google Analytics account shows, traffic figures for November 2016 (6 months after launch) were as follows: 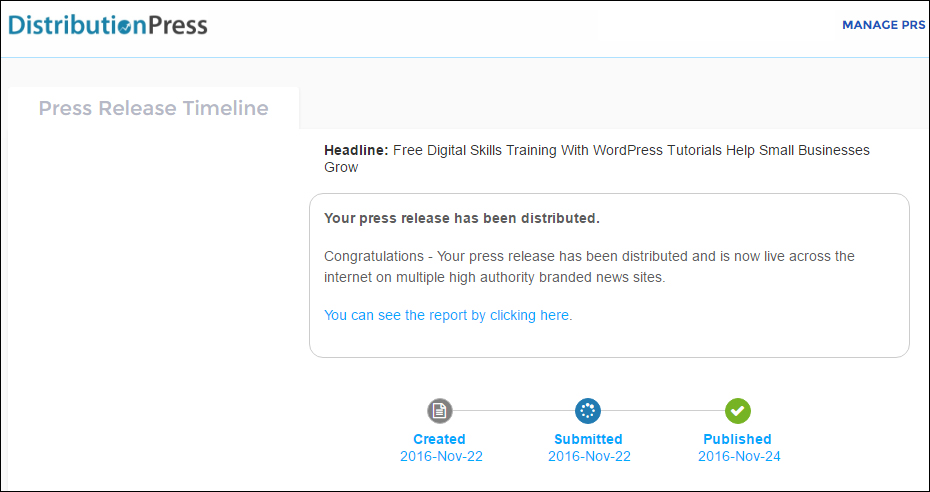 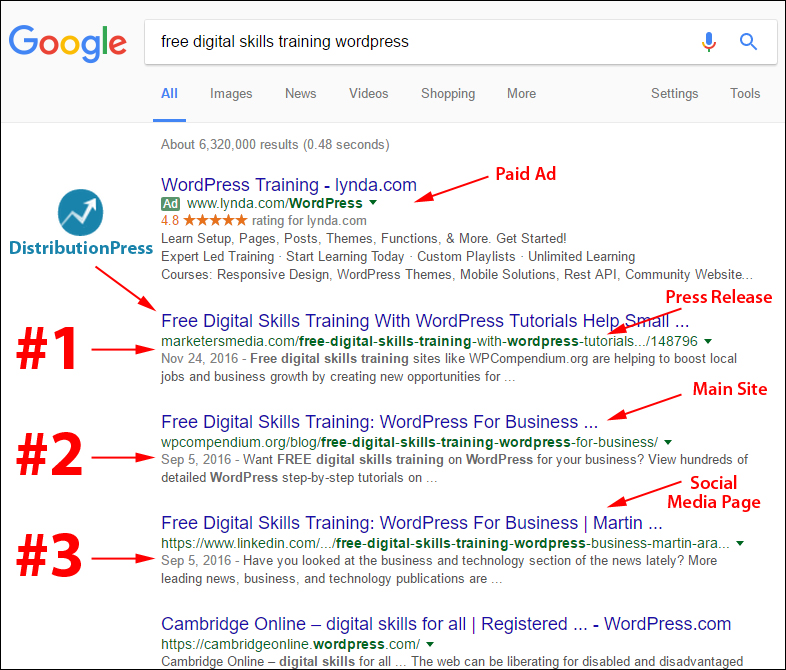 We targeted the long-tail keyword “Free Digital Skills Training WordPress” in this campaign to show that we can easily rank sites on the front page of Google’s organic search result listings using targeted press releases for low-to-medium competition keywords.

WPCompendium.org not only ranks at the top of Google’s organic search listings for the keyword Free Digital Skills Training WordPress but the press release also helped pushed up rankings for the main site and other related sites where WPCompendium.org syndicates its content to (e.g. social media pages like LinkedIn).

No one can predict what Google will do. Checking search results on different days, however, seems to indicate that WPCompendium.org is consistently ranking well for a number of top slots … sometimes it even dominates the top 3-4 spots … 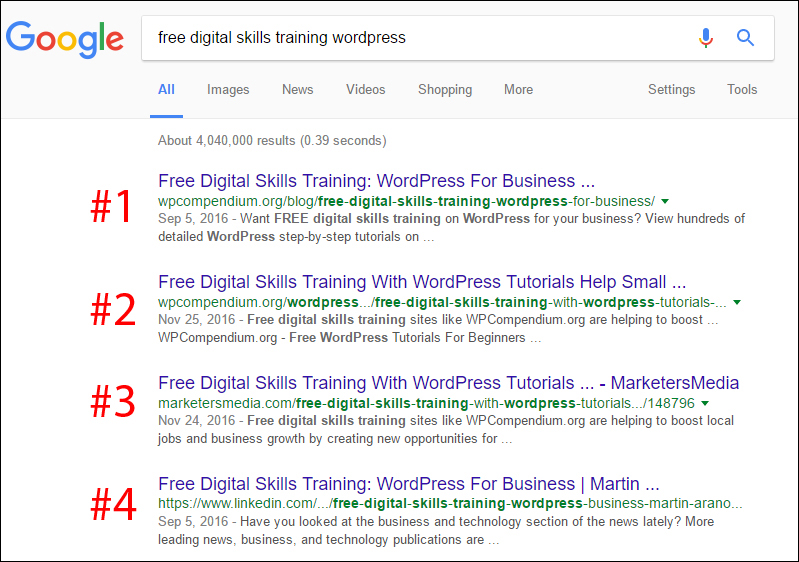 (Press releases can help drive up ranking for your website … even dominate multiple top/front page spots in Google’s search results!) 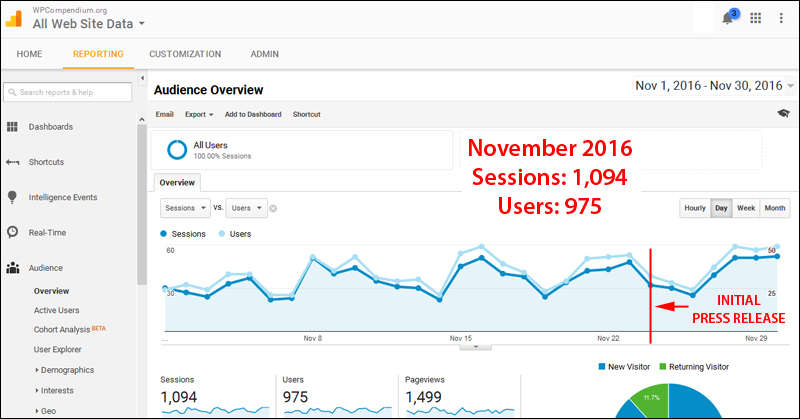 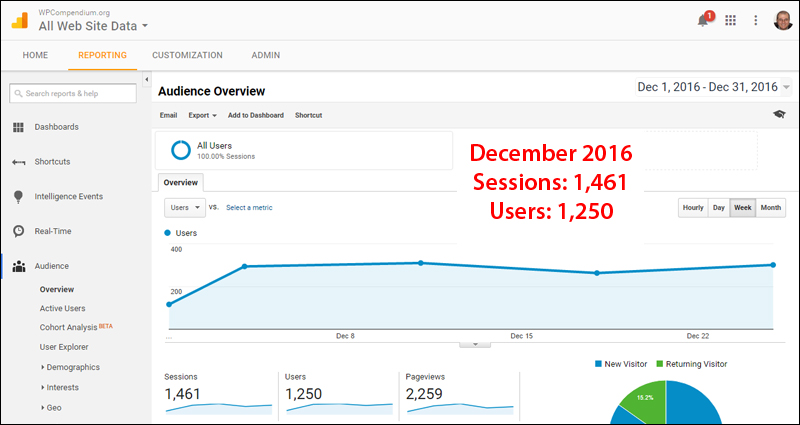 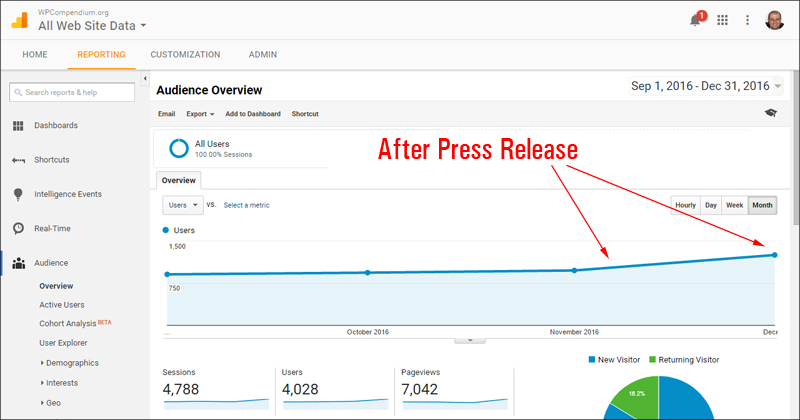 (WPCompendium.org – One Month After Press Release) 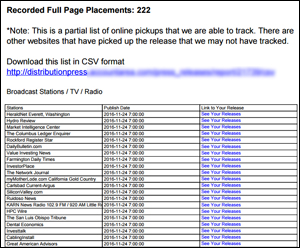 Let’s take a look at how Google picked up WPCompendium.org’s press release.

The news release was submitted to 220+ sites and many additional media outlets (update: we now submit to 500+ sites).

After the press release campaign went live, we visited Majestic.com to view what data they have gathered about WPCompendium.org. Majestic.com surveys and maps the Internet and, according to their website, has created the largest commercial Link Intelligence database in the world.

The screenshots below show the effects of submitting a press release on ‘Trust Flow’ and ‘Citation Flow’, which are defined by Majestic.com …

Trust Flow … is weighted by the number of clicks from a seed set of trusted sites to a given URL or Domain.

Citation Flow … is weighted by the number of citations to a given URL or Domain. 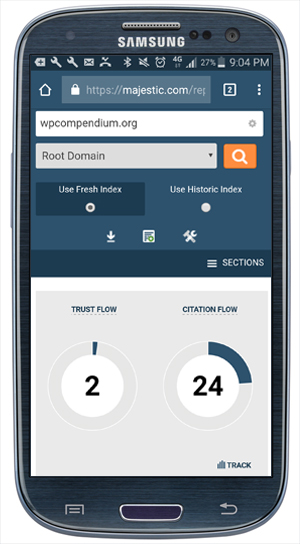 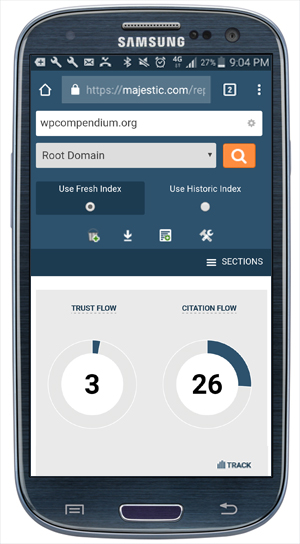 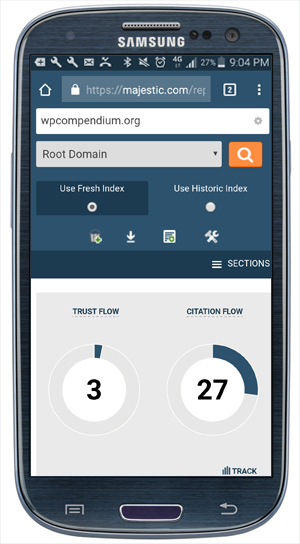 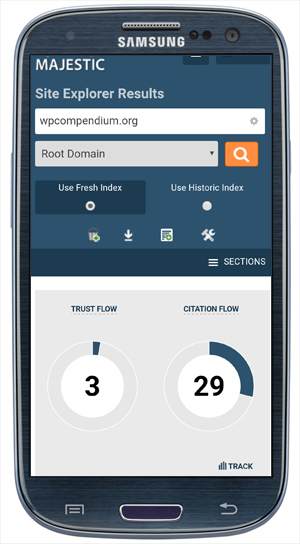 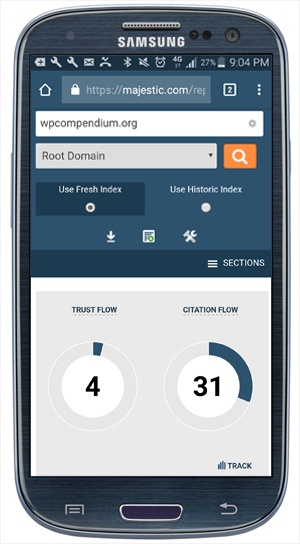 A quick check of the first 5 news releases sent by WPCompendium.org shows the following results (clicking on the link shows you the most current results):

As you can see, when we last checked over a year later, Google is still indexing over 300 entries from these news releases.

Do You Need More Traffic, Leads, Or Customers For Your Business?

Learn more about how DistributionPress.com can help your business get better results online, order your news release today, visit our FAQs section or contact us to if you have any questions.

Learn how to use news releases effectively to boost your search engine rankings, drive more traffic to your website, and generate new leads for your business.